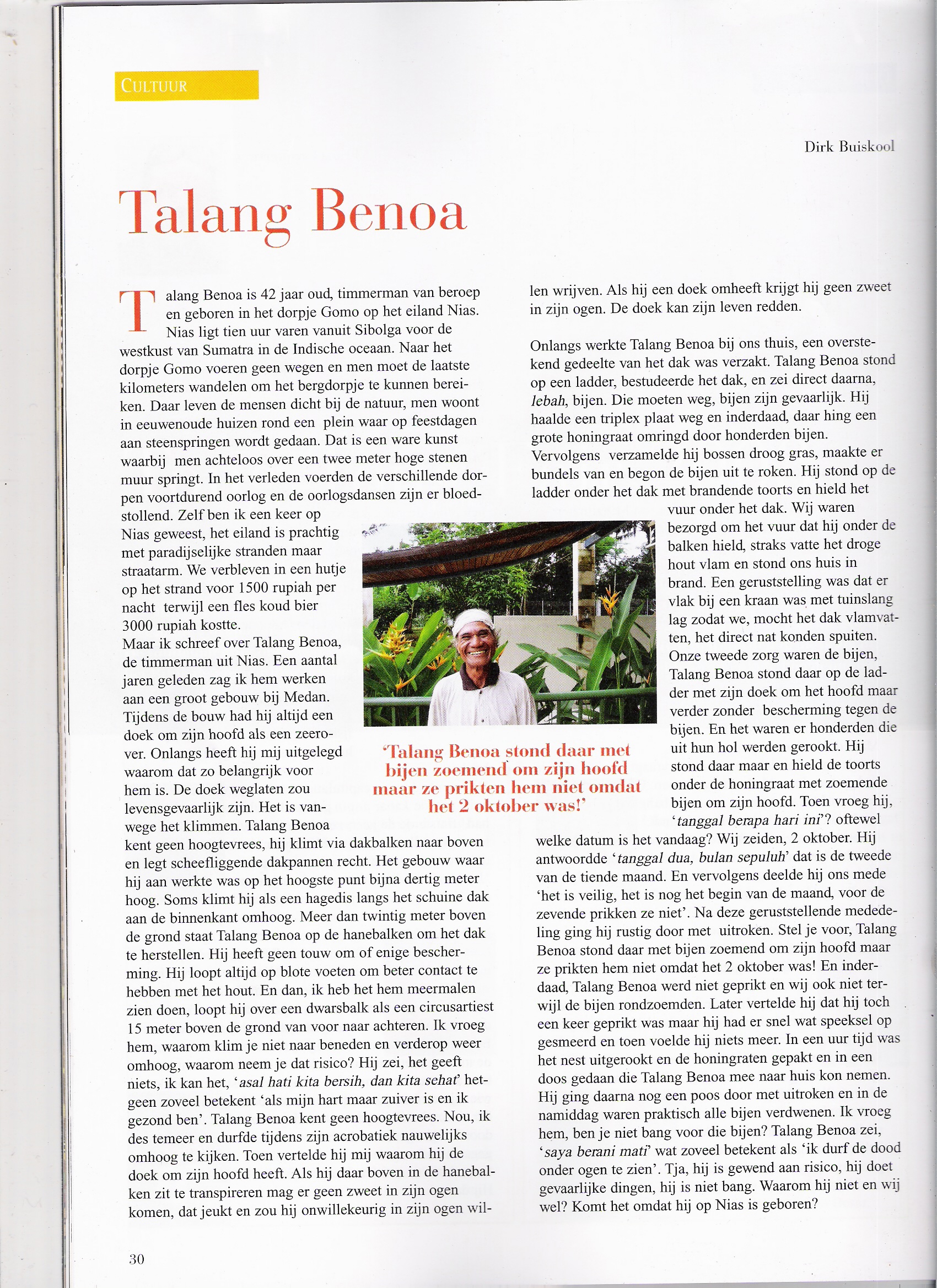 Talang Benoa was born in the village of Gomo on the island of Nias 42 years ago. Nias lies in the Indian Ocean and is ten hours by boat from Sibolga on the west coast of Sumatra. In the village of Gomo there is an absence of roads and one must walk the last few kilometers to reach the mountain village. Since the people are living close to nature, they live in ancient houses around a square where during days of festivities they compete in stone jumping. This is an art in which one jumps valiantly and fearlessly over a two meter high stone wall. In the past many villages were constantly at war and war dances on Nias are chilling. I was on Nias many years ago, the island is beautiful with paradisiacal beaches. However, poverty was rampant. We stayed in a cottage on the beach for 1,500 rupiah per night, while a bottle of cold beer costs 3,000 rupiah, double the price of the accommodation. Some time ago I saw Talang Benoa, the carpenter from Nias working on top of a tall building near Medan. During construction, he always had a cloth around his head that would not have looked odd on an 18th century pirate. He explained to me why that is so important to him, and why it would be dangerous would he opt not to wear his buccaneer canvas. It is because of the climb. Talang Benoa has no fear of heights, he climbs over the roof beams upstairs and lay crooked roof tiles right. At the highest point, this roof was nearly thirty meters high. Sometimes he climbs like a lizard along the sloping roof on the inside up, as if he were weightless. More than twenty meters above the ground Talang Benoa works in the cockloft to restore the roof. He has no rope or any protection. He always walks barefooted to have better contact with the wood. I’ve seen it several times, he walks over a cross beam as a circus performer 15 meters above the ground from front to back. I asked him, why do not you climb down and down up again, why take that risk? He said it does not matter, I can, ‘asal hati kita bersih than kita sehat’ which means something like “I can do this as long as my heart is pure and I’m healthy.” Talang Benoa has no fear of heights. Well, I, do fear heights and during his acrobatics I barely dared to look up. Then he told me why he has the cloth around his head. If he is up there sweating in the cockloft, sweat might drip into his eyes which would disturb his balance. When balancing on a beam 30 meters above the ground Talang Benoa has no time for eye rubbing. If he wears a cloth it would prevent sweat to come into his eyes. The cloth can save his life Recently,

Talang Benoa worked at our home at an overhanging part of the roof. He was standing on a ladder, studied the roof, and said immediately afterwards, ‘bees… They have to go, bees are dangerous’. He took a sheet of plywood and indeed, there was a large honeycomb surrounded by hundreds of bees. Then he gathered dry grass from a nearby forest, turned it into bundles and began to smoke out the bees. He stood on the ladder under the roof with a flaming torch and kept the fire under the roof. We were worried about the fire that he held under the beams, the dry wood could catch fire and set our house alight. Fortunately there was a faucet with garden hose so that, should the wood catch fire, it could be sprayed wet directly. Our second concern was the bees. Talang Benoa stood on the ladder with his cloth around his head but otherwise he had no protection against the bees. There were hundreds who were smoked out of their holes. He stood there and held the torch under the honeycomb with bees buzzing around his head. Then he asked, “tanggal berapa hari ini?” (What date is it today?). We said, October 2nd. He replied ‘tanggal dua bulan sepuluh’. (The second of the tenth month). And then he informed us, it’s safe, it’s still the beginning of the month before the seventh, bees do not sting in the second of the tenth month. After this reassuring statement, he went on quietly to fumigate. Imagine, Talang Benoa stood there hundreds of bees humming around his head, but he was sure that they would not sting him because it was October 2nd! And indeed, Talang Benoa survived the bees that day. Talang Benoa later said he still was stung once at the very beginning but he quickly smeared some saliva on the wound and he felt nothing. In an hour’s time the nest was fumigated and the honeycomb packed and placed in a box so that Talang Benoa could take it home. He continued a while with fumigating and in the late afternoon almost all the bees had disappeared. I asked him, are you not afraid of the bees? Talang Benoa said, “saya berani mati” (I have no fear of death). Well, he is accustomed to risk, he does dangerous things, he is not afraid. Why is he not, while we are? Is it because he was born on Nias?