The Mountain Town Of Berastagi On Sumatra

The name Berastagi (Brastagi) can be explained as follows. In the town, no rice grows due to the cold climate. Therefore the villagers went to the lower regions to buy rice. In the Karo Batak language, Beras Tagi (beras is rice, tagi is questions) means ‘asking for rice’.

The mountain town of Berastagi is situated on the road from Medan to Lake Toba. From Berastagi you can see 2 impressive volcanos: Sibayak and Sinabung. When driving from Medan up to the highlands of the Karo Batak tribe, you will after a few hours arrive in the mountain town of Berastagi. Brastagi lies at the feet of two active volcanoes, the Sibayak, and the Sinabung. Because Berastagi is situated in the highlands at 1400 meters above sea level, it has a cooler climate and is therefore very suitable for growing fruits and vegetables. The colorful market of Berastagi is always worth a visit. You can buy marquisa, rambutan and many other tropical and subtropical fruits.

Climbing the volcano Sibayak near Berastagi

For sports enthusiasts, the volcano Sibayak can be climbed. From the top, you have an impressive view of the surroundings and the moon-like landscape with smoking sulfur craters of the volcano. 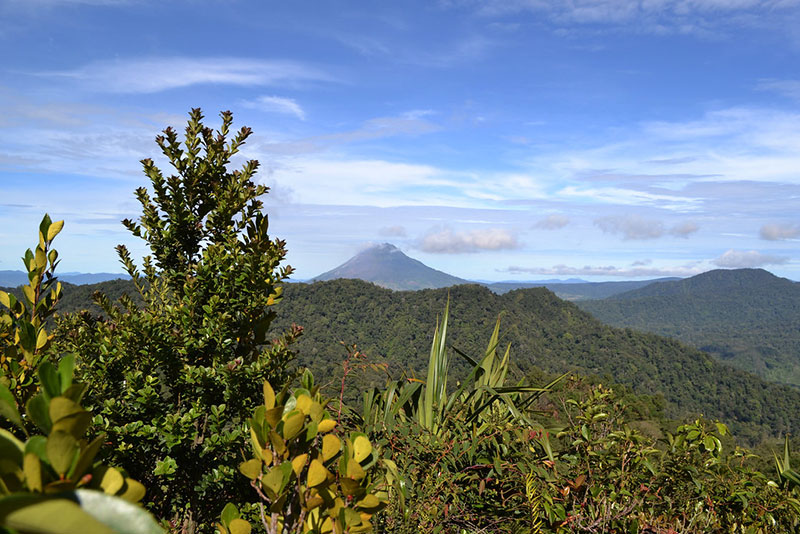 In Berastagi, you can take a ride with a “sado.” These horse carts got their name from the French ‘dos-a-dos’, in which the passengers sit back-to-back.

Madelon Szekely-Lulofs describes the arrival in Berastagi in her book Rubber from 1933 as follows:

“One last turn, and there was Berastagi. Bungalows were spread across the plain. Colourful flowers in the gardens. Most bungalows were holiday homes of the plantation companies, a few were private villas. On the edge of the hill stood the hotel, which from afar looked like an ark.”

She described the Grand Hotel Brastagi, built in the 1920s. It was a chic hotel where guests would change clothes for dinner. When Madelon Szekely Lulofs visited it, Berastagi was already a popular holiday destination. From everywhere on Sumatra, and also from Penang in Malaysia, people came to the village in the Karo highlands. In the 1920s and 1930s Berastagi was transformed into a villa village with manicured lawns, rose gardens, swimming pools and tennis courts.

In 1946, during the fights for the Indonesian independence, many hotels and villas were destroyed by fires, including the Grand Hotel Brastagi. It was, in fact, the second time the Grand Hotel Brastagi caught fire. The first time was in 1925. Although the Grand Hotel Brastagi was destroyed the swimming pool behind the hotel survived. The Planters School Association, a boarding school for children of the planters, stood nearby. During the Japanese occupation, this school was used as a prison camp. It was also destroyed in 1946 by a fire, only the foundations can still be seen. Fortunately, the former hotel of the ‘Bataafsche Petroleum Maatschappij’ (BPM, later Shell) has been preserved as a fine example of colonial architecture. In addition, there are many villas from before 1940 spread over the town of Berastagi. 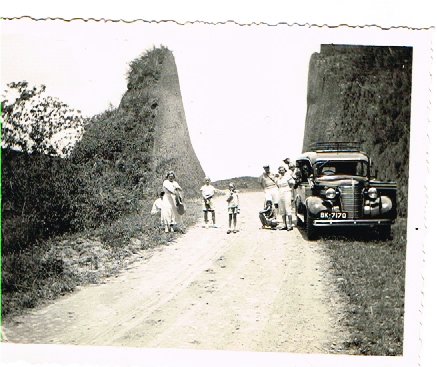 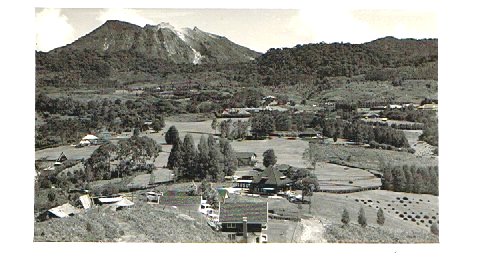 In Brastagi you can also take a ride in the sado’s. These horse drawn carts get their name from sitting back to back, in French, dos a dos. The name Berastagi can also be traced. There is no rice cultivated here as it is too cold. The villagers went to the lower regions to ask for rice. In Karo Batak language, Brastagi means (beras is rice, tagi is asking) asking for rice.

As Brastagi is located on 1400 meters above sea level it has a cooler highland climate and therefore very well suited for vegetable and fruit cultivation.

In Brastagi you can make nice trips in the region for instance to the still active Sinabung volcano. 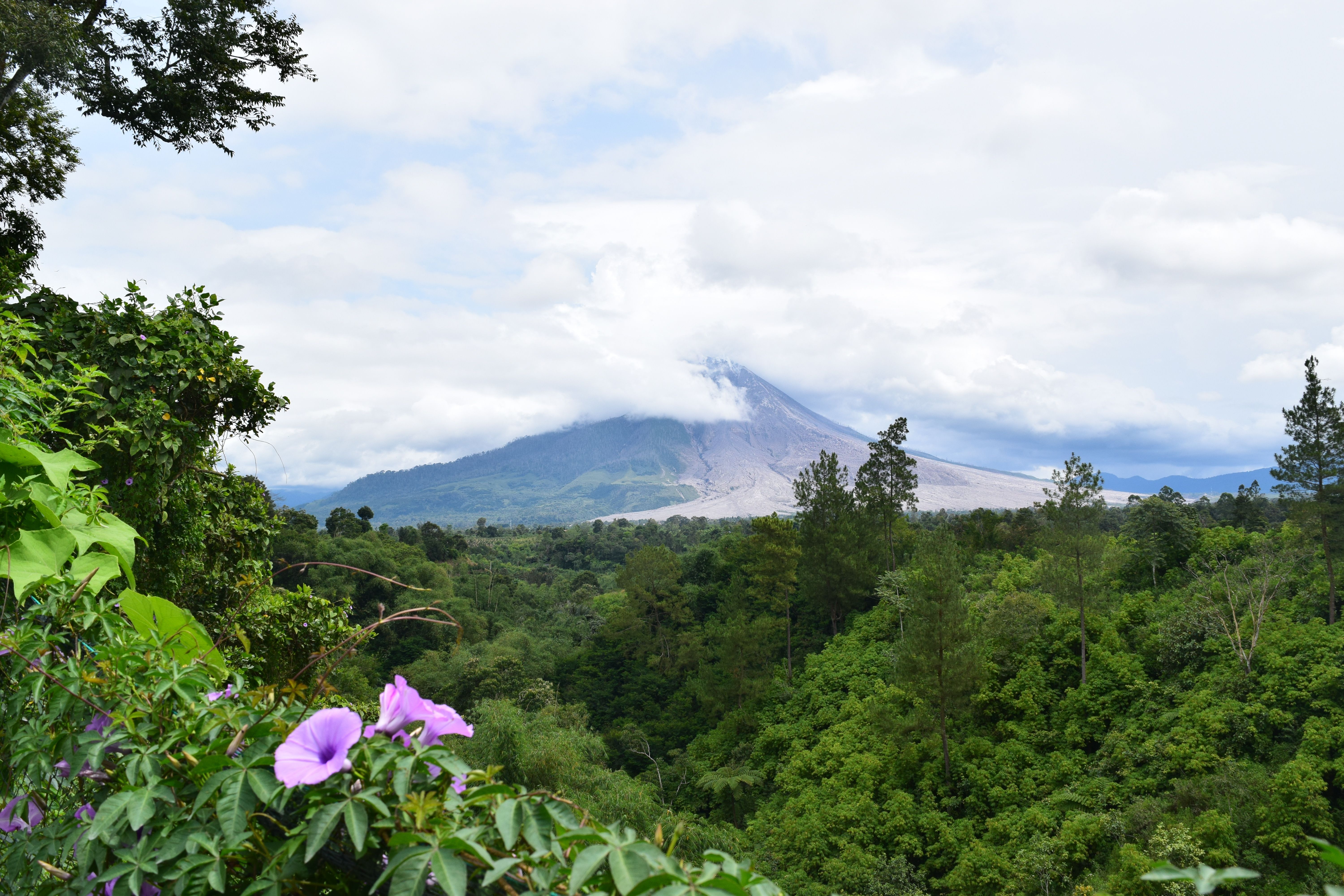 The colourful market is worth visiting where you can buy marquisa, rambutan and many other tropical and subtropical fruits. 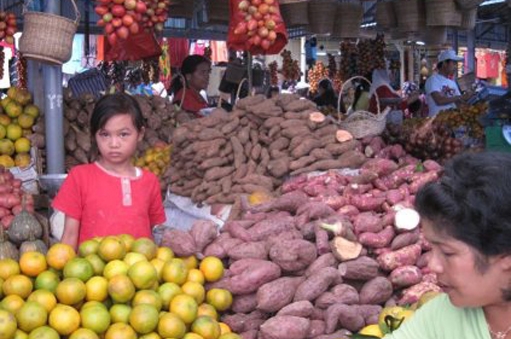 Climbing the Gunung mountain Sibayak
For those who are sportive enough, you can climb the Sibayak volcano. On top of the mountain is a moonlike landscape with smoking sulfur craters and looking around you will be impressed with beautiful views of the area. 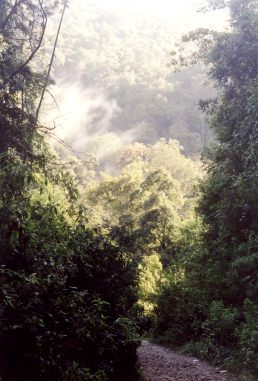 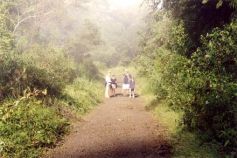 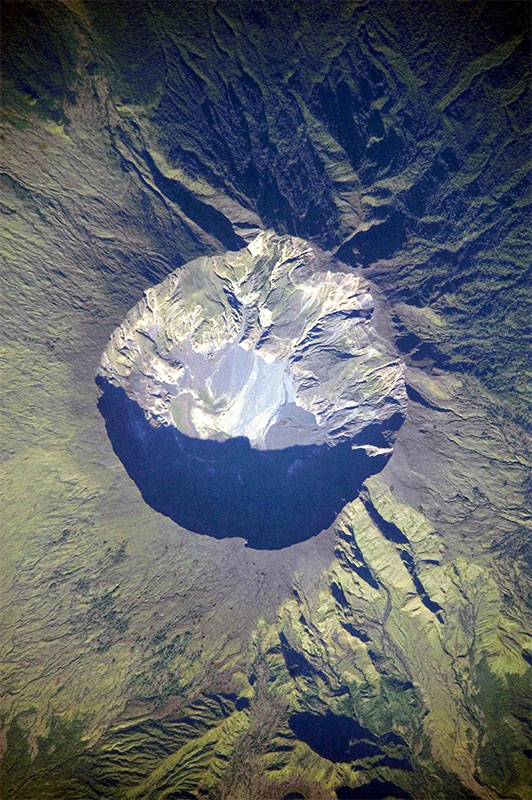 The old shell hotel in Berastagi

The old Shell hotel, with the carvings above the fireplace.

(Every guest brings joy, or
at arrival, or at departure.) 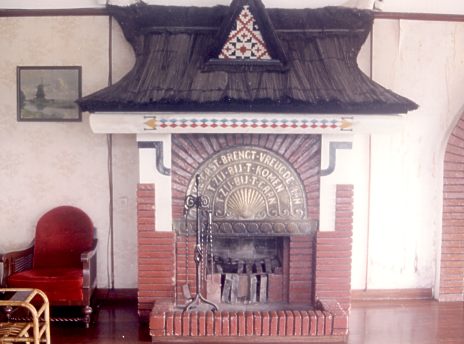