Small town at the coast

The Trans Sumatra Highway is the most important road over the island. The highway goes via the city of Tarutung to south Tapanuli, to West Sumatra, the land of the Minangkabau. At Tarutung we take the road to the coast, to the old harbour town of Sibolga. This means taking the road with the thousand curves. It is an impressive route, especially when finally you arrive at the coast and from high up on the mountains you can see the beautiful natural bay of Sibolga. Sitor Situmorang went to school in Sibolga from 1936 to 1938, he wrote about the town:

‘There was a time that the city for the mountain people was the middle of the world. There they sold incense and let their children go to school or had to appear before the court, because Sibolga was the capital of the region. In former times the trade in incense was one of the main inland activities. Trade in incense had seen ups and downs and we could all see this from Sibolga. This also was true of the rubber trade. Incense from the mountains, rubber from the coastal area, had made Sibolga great fifty years ago. At a place where a lot was sold, you also could buy many things. Foreign goods were popular, like silk textile… At the same time big trading companies were established: Guntzel & Schumacher, Geo Wehry, Henneman, Lim Hong Lap and others… The city of Sibolga is situated on a beautiful quiet bay…. From far away you can see the white sandy beaches of the many small islands, because the sea is very calm and clear. In the period of prosperity, when the rubber prices were high, people came here to enjoy the panorama…’ 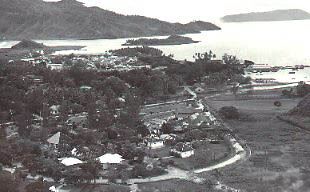 Sibolga around 1930
WhatsApp us