Medan is a fascinating multicultural historical city. As there are many ethnic groups living in the city, such as the Javanese, Minangkabau, Batak, Indians, and Chinese, the city is an example of a multicultural and multi-ethnic society. Tri Jaya Tour & Travel provides special architectural tours along the various ethnic neighborhoods and will guide you to pre-war historical buildings.

Medan is the capital of the province of North Sumatra. The plantation industry, that started in the 1870s, is an important part of the history of the city. Money was made by exporting tobacco, rubber and palm oil. To this day, impressive buildings remind of these glory days from the colonial times. The most famous buildings from before 1940 are the palace of the Sultan of Deli, the Great Mosque and the House of Tjong A Fie. Today, Medan is a fast-growing city with modern high-rise apartment buildings, large hotels, and many shopping malls. In addition, Medan still offers heritage buildings. This makes the city of Medan particularly interesting.

The Story Of Medan

Fortunes were made in the rubber- and tobacco industry and that could be seen in Medan. Louis Couperus, the writer of the famous colonial novel ‘The silent power’, visited Medan in 1922 and wrote:

“The fresh white town, as Medan is, with its elegant white buildings and villa quarters, lies though beneath a spray. It is never dirty, like western rains, and even nature itself can make a town dirty. Here, there is no offensive mud, it is just watered earth… She is modern and European; .. Hotel De Boer and Medan Hotel, the impressive offices of several companies, like Harrisons and Crosfield, Deli Company… they are standing there … As white buildings of prosperity, of hard labor, of admirable effort.” (Couperus, Eastward, 27,33,46)

Around the central square, the ‘Esplanade’, are the most important buildings of Medan located. Here was the office of the Java Bank, build by the architectural firm Hulswit, Fermont & Cuypers. Next to it was the town hall from 1908 with the clock tower, which was donated by the wealthy Chinese businessman Tjong A Fie. A bit further down the road was Hotel De Boer, build in 1898.

“The principal hotel of Medan, hotel De Boer, was situated at a wide field of grass, surrounded with a broad asphalt promenade. The main building had two stories. Downstairs was the dance hall and the dining room, with a large terrace. Upstairs were bedrooms. On either side of the main building was a pavilion, two long rows of bedrooms each with its private veranda and bathroom. The pavilions were joined to the main building by a roofed cement path. Between the main building and the pavilions lay a strip of garden, a path, and a strip of grass.” (Madelon Lulofs Rubber, 1933: 31)

So far a quote from the novel Rubber by Madelon Székely Lulofs.

Hotel De Boer
Was famous all over the Dutch Indies. The elite who visited Medan stayed at this hotel. At Hotel De Boer stayed King Leopold of Belgium, the oriental dancer Mata Hari and famous names out of the Dutch cabaret, such as Cor Ruys, Jean Louis Pisuisse and Koos, and Cesarine Speenhoff. Louis Couperus stayed in Medan in 1922. Years later, Mrs. Burghardt de Boer, daughter of the owner, wrote about Couperus:

“I personally met Louis Couperus, my most admired Dutch writer, but in reality, unfortunately talking in an elite way of gestures and speaking, in the Deli of that time, early ninety twenties, already walking around early in the morning in a perfect shantung suit, flower in the pocket, surrounded by a distinguished cloud of perfume.“(article Burghardt de Boer)

The writer’s couple Székely has written about Deli in an intriguing way. In 1933, Madelon Székely published the novel Rubber, which immediately caused a wave of both excitement and protest, caused by the raw impression that was given of Deli and because of the affair of the married Madelon Lulofs with Ladiszslasz Székely, of which as a result both had to leave Deli. Rubber became a bestseller and is even filmed. Not very flattering, Madelon wrote about the Deli planters when they had their monthly day off, the ‘Hari Besar’:

“It was a noisy dinner. There was singing and shouting. The hors-d’oeuvre were thrown through the hall. Plates and glasses broke. Leftovers of the dinner were laying everywhere. The tablecloth was sticky of beer. Three mustard jars and a butter jar ware emptied over the head of one of the assistants.” (Lulofs Rubber 1933: 50,51) 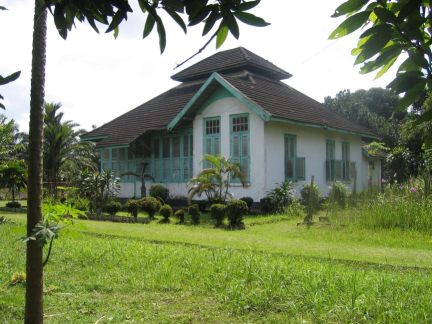 Although Medan was a typical European plantation town, the most famous inhabitant was not a European, but the Chinese Tjong A Fie. In the rags to riches story about the Major (highest representative) of the Chinese Tjong A Fie, goes the story that he arrived in 1875 at Sumatra penniless and in a few decennia he made a fortune in the plantation industry. Around 1906, he bought his first rubber plantation and at his death in 1921 he owned around twenty rubber-, tobacco- and palm oil estates and employed over ten thousand people. His right-hand and trusted person was the Dutchman Dolf Kamerlingh Onnes, brother of the Nobel price winner Heike Kamerlingh Onnes. In 1923 Dolf travelled for the last time to Sumatra to arrange the financial affairs of the late Tjong. This time, he made the journey with his cousin Harm who, during the trip, wrote long letters to his family which were illustrated with beautiful drawings. From Harm, we get an impression of how the white upper-class of Sumatra lived: 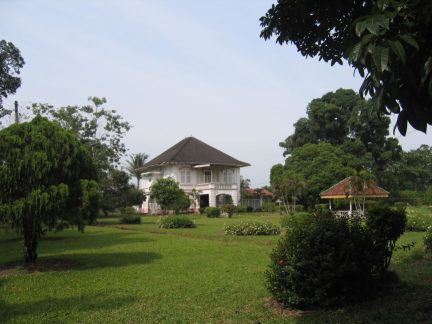 “This morning at seven thirty, Huelsen’s car, a bright red Cadillac, arrived, with a black Kling driver with a dark-blue cap, and I flew (the car drove very fast) to Tanjung Morawa. My gosh, what are these people spoiled with space if they go back to Europe! When you enter, you see somewhere at the horizon a breakfast table, Mrs. Huelsen, three children, a German governor.” (Buiskool De reis van Harm Kamerlingh Onnes 1999:  96)

The visible history of Medan

The remarkable thing about Medan is that almost all the buildings from the literature are still there. They are not torn down. The big villa of the Huelsen family in Tanjung Morawa still exists, Hotel De Boer, the office of Harrisons & Crosfield, the house of Tjong A Fie, we can still see it when we drive through Medan. The bestseller of the Dutch writer Geert Mak ‘De Eeuw van Mijn Vader’ (The Century of my Father), partly played in Medan. Just like the Mak family, there are countless Dutch people who, in one way or the other, have ties to this city. It was a part of The Netherlands, with all positive and negative sides, with Dutch names, companies, and buildings designed by Dutch architects.

Sumatra has one of the greatest unspoiled rainforests in the world. There are small towns where time seems to stand still, like Sibolga. During the trip from North to West Sumatra via the ‘Trans Sumatra Highway’, right through the jungle covered mountain ridge Bukit Barisan, is absolutely unforgettable. Everywhere are old plantation houses, schools and plantations to be found that reminds of the Dutch colonial history. These are the “bittersweet memories” of a former Dutch colony. It has not disappeared, you can still visit it.